FIRE!  It’s what we must have for survival. When the power goes out and batteries are dead, it’s fire we need to see with, to cook with and to heat. It’s pretty important to have the means for making fire when it comes to emergency preparedness.

==== NOTE: If you’d like a Firstarter Kit for your camping gear or emergency preps but lack the time to gather and organize one, you can now purchase my Large Firestarter Kit, or Regular Firestarter Kit Made-to-Order and already built and organized for you from my new website: preparednesskits.net ====

Elements Needed in Making a FIRE

Easy to store and use. “Strike anywhere” matches are some of the easiest to use. There is also “Strike on box” which use the side of the box to light up. Some cheaper matches are harder to get started and break easily. I personally prefer the “Strike Anywhere” matches.

TIP: Store matches in several different locations. If you have them in the same container or bag and it gets lost or destroyed, then you are out. So store in a few different places.

You can buy many different kinds of lighters. Generally “Bic” lighters are the most dependable for disposable use. 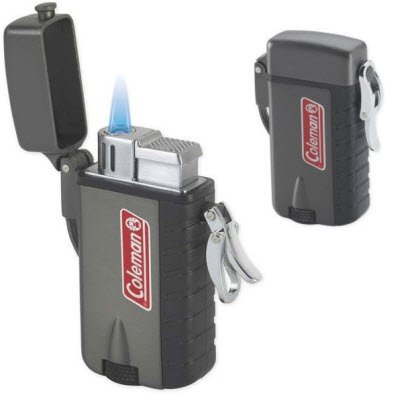 You can also get waterproof and windproof lighters. If you find a nice lighter, you can get some butane refill fluid and let it last you up to five times longer than your disposable ones.

This is a classic fire-starting system. The block is magnesium and you use the striker or a knife to scrape off shavings or dust from the magnesium until you have a little pile.  Then you use the striker on the bar of flint to create sparks to ignite the pile of magnesium.  It takes a while to scrape the magnesium, and to master the angle/skill of getting sparks; yet this is an effective means to making fire. 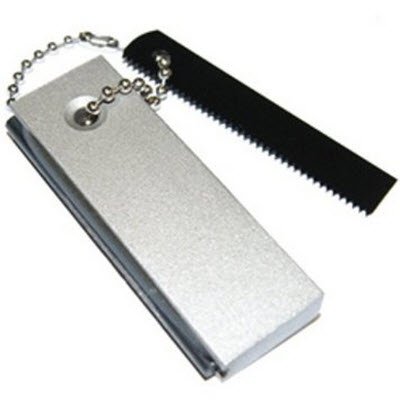 Once the magnesium is on fire, you add your tinder to get it going and build it from there.

Similar to the Magnesium & Flint, a steel and striker (scraper) is a tubed piece of metal that sparks can be created from when you tap or run your striker over it. 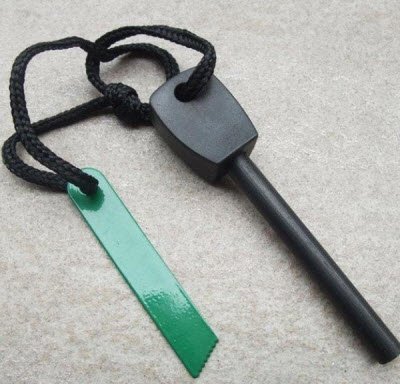 These usually still work even when they are wet, and are good to have. 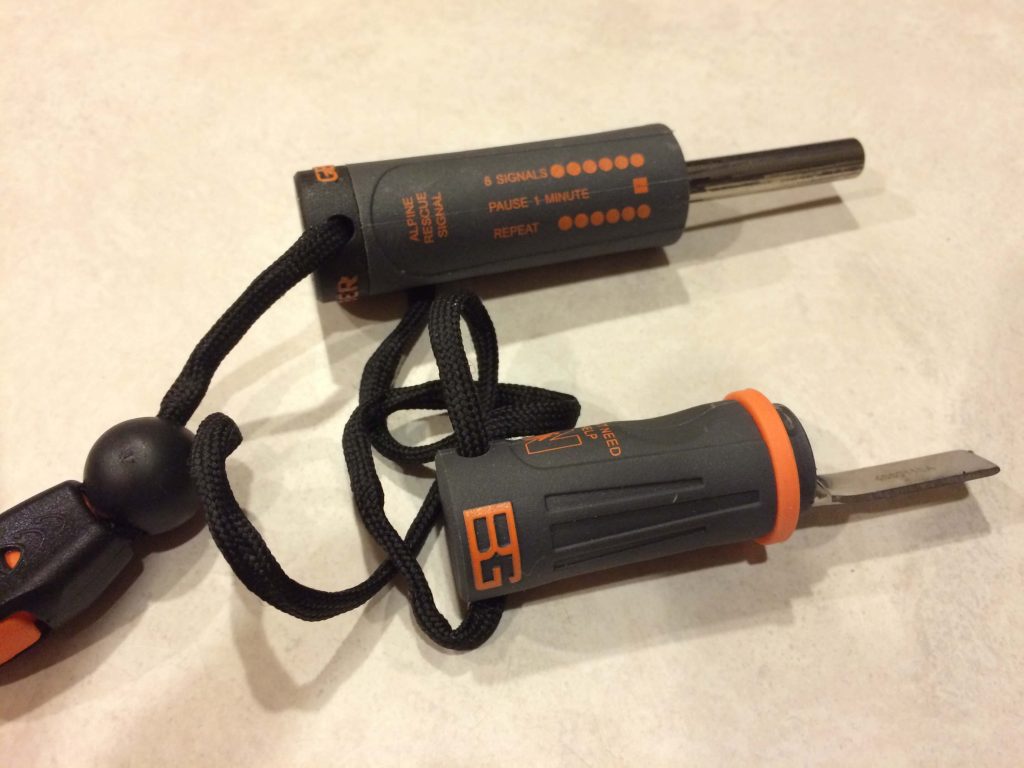 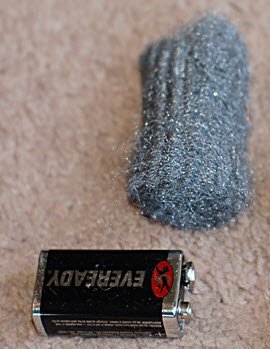 Take a 9 volt battery and basically touch both positive and negative ends to a piece of steel wool and it will start a fire. See video demonstration here.

You can also take a foil gum wrapper and a AA battery and make fire. You cut the wrapper in an hourglass shape and then touch each end to the ends of the AA battery. A fire will start in the middle of the wrapper. See video demonstration here.

Make Your Own FIRE STARTER KIT: 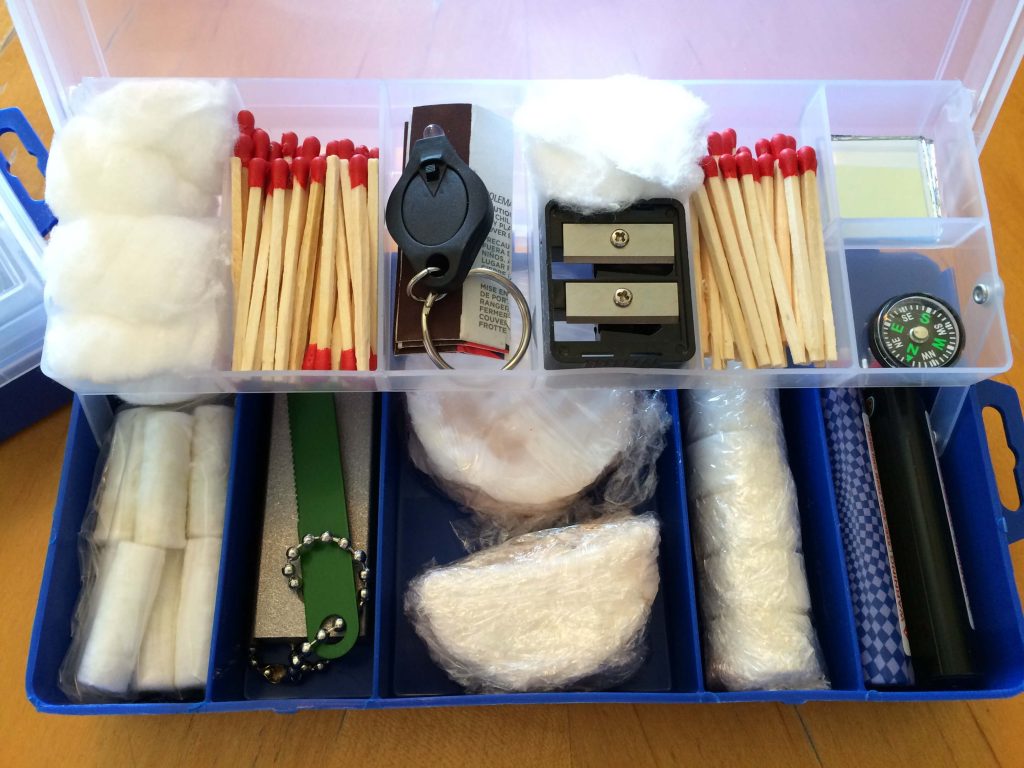 I put together my own kit for making fire. I used a small plastic tackle box that I got at Walmart for around $3. Inside I put the following:

Strikers cut out from box of matches

2 Small square Mirrors – You can make fire with mirrors, this is a last resort

Fire-Starting rolls – Got at Walmart, and they are little firestarters

Magnesium, Flint & Striker – For when the matches and lighters run out

Homemade Wax Firestarters – wrapped in pastic. Each wafer will burn for about 12 minutes 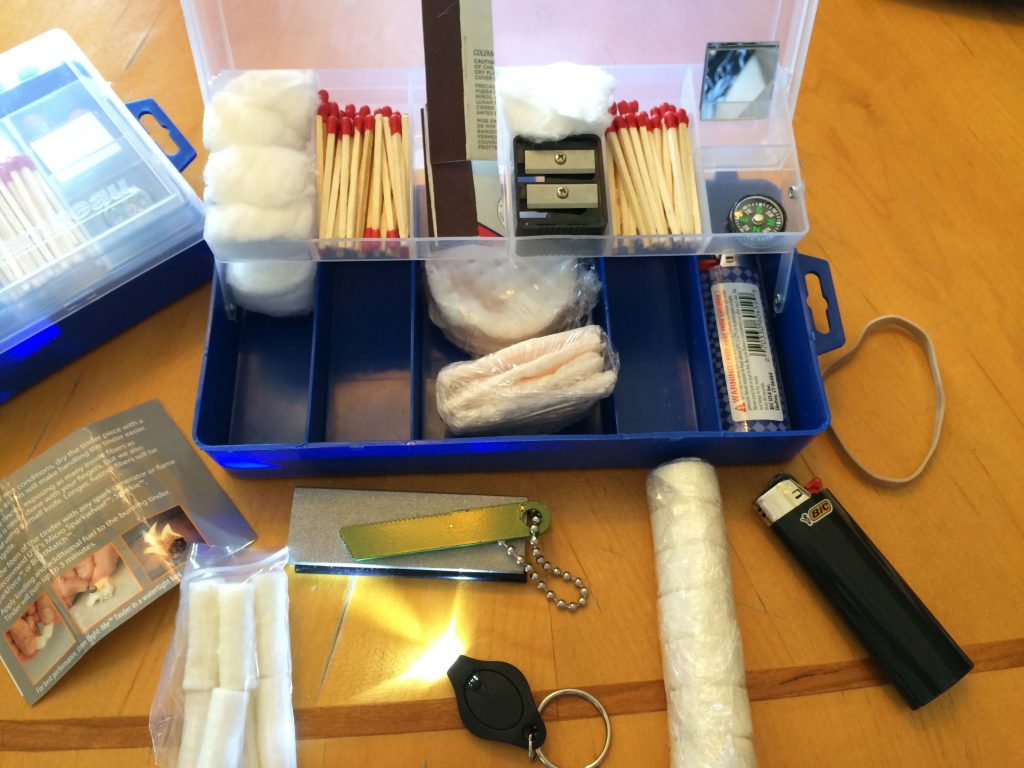 Items you might also want in your FIRE STARTER KIT: 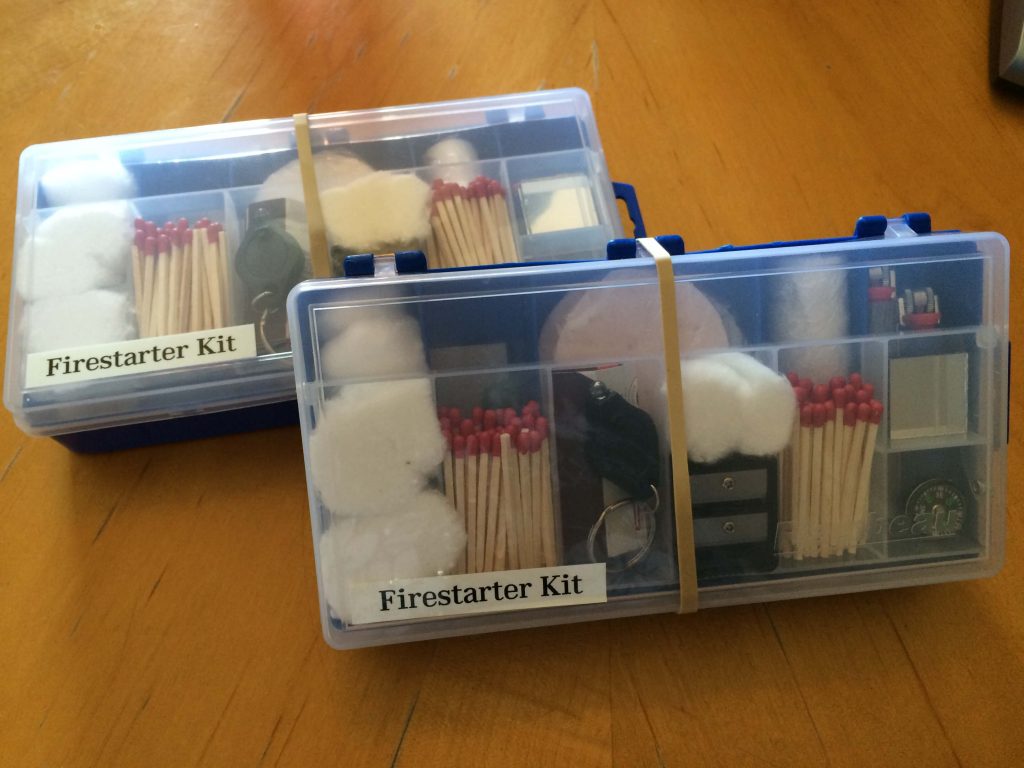 My box snaps shut, but I add a rubber band for peace of mind that it won’t accidentally fall open and spill.

Now get your fire-starting tools together and be prepared for when you need to make fire!

Other resources to check out: