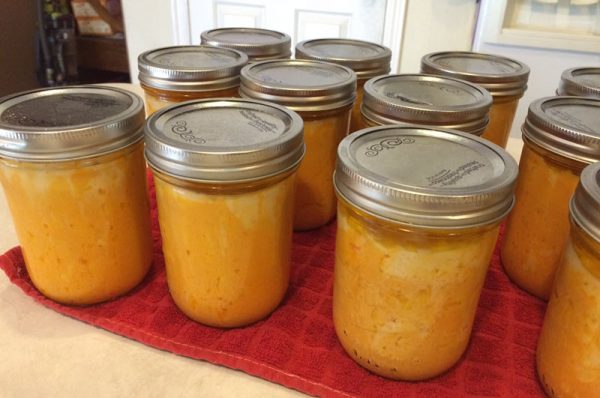 *** Disclaimer, many people say that it’s not recommended to bottle anything dairy including cheese due to the risk of botulism. You may want to do your own research and bottle at your own risk. ***

After looking through several blogs on people who have successfully canned cheese for many years, I’ve taken most of the ideas I used from The Last Frontier Blog.

I know our ancestors successfully bottled, stored and consumed all kinds of foods well before the FDA was created to regulate what is considered safe and what is not. I also know that the FDA has deemed many foods packed with chemicals and toxins as safe, so I take it with a grain of salt.

I have bottled mild cheddar cheese and Colby jack. They will still age and become sharper when opened.

How long will the cheese last in storage? I don’t know. I know that cheese has the potential, if kept from bacteria, to store for up to 30 years. But I’m planning on eating ours within 1-2 years at least. Maybe it would last longer than that.

When your cheese is cooled, it solidifies again. Then when you want to take the cheese out, use a plastic knife and slide around between the glass and the cheese to loosen and then slide the cheese out. You can now slice it or even shred it to use on your taco’s or sandwiches or whatever!  It’s CHEESE!!!